Case History:  "Bogo", a 1 year old standardbred colt, presented with a 12 hour history of a degloving injury to his left front cannon bone.  The owner reported that they had found an area in the "horse safe" fence where he had put his leg through.  He suspected that the skin and underlying tissue degloved when he pulled the leg back through.  The referring veterinarian was concerned that due to the extent of the damage we would not be able to fix the injury with a satisfactory cosmetic result.

Physical Examination:  On presentation the skin and some underlying subcutaneous tissue had been degloved from the midcannon bone region.  There was some underlying tendon involvement.  The horse showed no signs of lameness or discomfort. 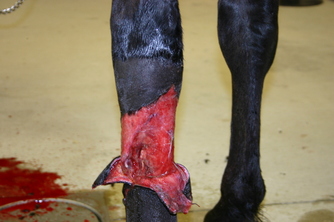 Plan:  Due to the nature of the of the wound, it was determined that we would suture the tissue flap back in place.  Because some skin was missing, the flap was repaired where skin edges would appose (Figure 2).  Once the wound was debrided, lavaged, and repaired, a standing bandage cast using fiberglass cast was applied (Figure 3). 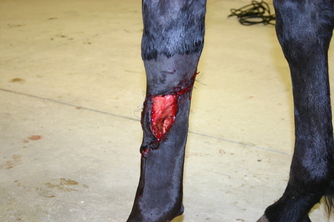 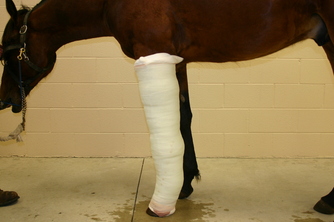 Day 8:  On Day 8 the bandage cast was cut down the front and the back creating two symmetrical pieces.  The bandage underneath was removed and the wound was cleaned (Figure 4).  A fresh bandage was applied and the two pieces of cast were placed back over the wound and secured over the bandage using duct tape. Due to the tension on the skin edges, some of the sutures pulled out and the skin retracted. 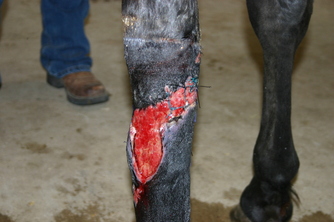 2 Weeks:  After two weeks the sutures were removed.  The wound is starting to fill in nicely with granulation tissue (pink tissue).  The skin edges started to show migrating skin cells (Figure 5).  During this time he remained on strict stall rest with the wound bandaged and in the cast splint. 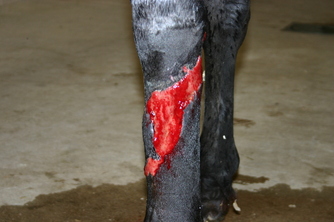 4 Weeks:  After 4 weeks the wound was  coming together nicely as the migrating skin cells really started to close the wound edges.  You can see a bright pink line at the top of the wound (Figure 6).  This is the line of migrating epithelial cells.  At this point it is being managed in just a standing bandage with stall rest. 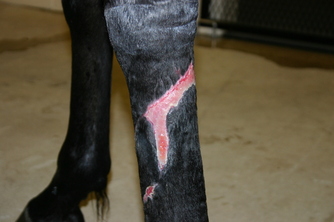 7 Weeks:  After 7 weeks, the wound was essentially healed.  There are skin cells completely migrated over the wound.  He was sent home to remain on stall rest for 2 additional weeks and before allowing turnout.

Case Wrap-up:    Wounds of the lower limb can be very problematic.  There is very little tissue coverage over the vital structures.  We were quite lucky in this case to only have the skin involved with minimal underlying damage.  Although the horse was a yearling, he did very well in his bandage cast and stall restriction.  When we minimize motion with a cast, we really reduce the likelihood of infection and granulation tissue.  This case responded well to all therapy and was discharged to a very happy owner.

One Year Later:  A completely healed "Bogo" went on to begin a successful racing career, with no limitations resulting from his injury. 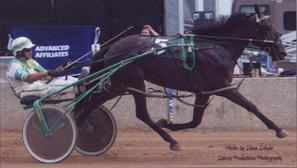 If you have any questions regarding wounds over the lower limb, please feel free to contact us.