A Sad Story of Neglect

In My Experience
Ron Conley, DVM 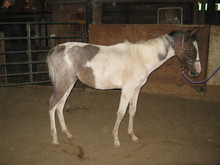 Recently I saw two horses that were taken from their owners due to neglect. The first of the two horses was led out to be examined. You could see every rib and his withers and hip bones were quite prominent. I was thus introduced to Tony, a yearling pinto stallion that was less than one half the weight of the yearlings that I had seen at the Standardbred sale just 2 weeks before. Tony had a rub mark across his nose where a halter had been left on too long. He also had numerous scrapes and cuts.

The physical exam revealed that Tony had a low grade fever. His lymph nodes palpated normal. His lung and gut sounds were normal. A weight tape indicated that Tony only weighed 400 pounds. Most yearlings weigh 800 - 900 pounds this time of year.

How do people not recognize that horses, especially young growing ones, need the proper feed to grow and mature? Feeding instructions were given to the foster caregiver. A fecal sample was obtained to determine if parasite infestation was a problem. Antibiotics were prescribed for his infection.

We were not done at this point. A second horse was led out. A six year old mare that looked like someone had stretched skin over a skeleton. She also had open wounds. The weight tape indicated that she weighed 790 pounds. I estimated from her size that she should have weighed around 1200 pounds. Other than the open sores, the physical was normal on this mare. A fecal was obtained and antibiotics were prescribed.

I was told that before these horses were seized by Animal Care and Control, two horses from the same premises had already died. When officials inspected the farm they found no hay, grain, or other feed. As veterinarians that work daily with owners trying to provide the best care for their horses, neglect cases like this are especially difficult to understand. Why would owners keep horses that they do not provide with even the most basic necessities? When they look at these horses, can't they see the signs of neglect?

At least for the two horses that we saw, the future holds promise. They are now receiving proper care and nutrition. The caregivers that we saw were lavishing the horses with attention; medicating, grooming and routine handling. We certainly hope that once all the legalities have been resolved, these two will find caring homes.