Perspective: How to Determine the Value of a Horse

There is nothing like talking to an old horseman to help you gain perspective in life. This is especially true when that old horseman is a 70 year old Amish man that has been breeding standardbred racehorses all his life.

One spring afternoon I had driven to Joseph's house to breed a mare named Memories Parked. I introduced you to Memories Parked and Joe's son's Josh and Lester in my blog entitled "My Favorite Broodmares: Tilleys Going and Memories Parked". Memories' foals now sold every year to a private investor from New Jersey. I don't know what he paid for them but it was a lot more than $1500.

The old man motioned me over to a porch swing. "There's something I want you to see" he called.

I looked at Joe. The lines and wrinkles on his face betrayed the knowledge behind the bright eyes. His rough, strong hands told the story of a lifetime of hard work. Those hands had built the house and barn we now stood beside. Heck, those hands had built my house. I have a lot of respect for Joe.

When I finished reading the article Joe handed me a FedEx envelope. Inside was a letter written on linen paper. It was from the investor. The substance of the letter was that The Investor wanted to buy Memories Parked for $75,000. That he would meet Joe at any time and present the money in cash.

When I finished reading Joe said "can you believe that a man spent $5.75 to send me a letter?" Joe was not impressed with the mention of his mare in the magazine. He wasn't impressed by the $75,000 cash offer. Joe just couldn't believe someone would spend $5.75 to send him a letter. 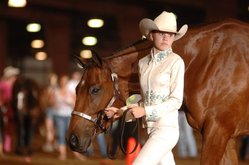 I asked Joe "are you going to sell her? It's a lot of money!" Joe looked at me with a knowing grin. "Naw" Joe whispered, "I'll never sell her." "Owning that mare gives more pleasure than the money ever could."

I now own a horse named Zippin Hot Harley that is worth a lot of money. Due to my daughters hard work (I am biased, but she is an incredible rider) and his athletic ability, they have been very successful. I have had opportunities to sell him for quite a bit more money then I paid for him. My wife and I talked it over. We know the smart thing to do is to sell. You know what? In the end we decided that Joe was right; owning Harley gives our family more pleasure then the money ever could.