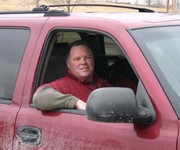 Because I have so many Amish friends and clients some of my "English" friends are very curious. I am often called upon to tell them about the Amish lifestyle. My "English" friends are often disappointed when I tell them the Amish are just like people of all religions. Some Amish people are impetuous and irresponsible, some are devote and reserve. Some Amish are lazy and some are hard working. I know dishonest Amish people and I have great Amish friends that are beyond reproach. Of course I know people of many religions that are dishonest, lazy, and irresponsible. I also know nonreligious people that are moral, honest and hard working. People are people no matter what religion. This is a story that illustrates what I am talking about.

One Saturday evening I was called to a house to see a horse that had fallen while pulling a buggy down the road. The caller explained that he was a neighbor to the owner of the horse. The actual owner was gone and could not be reached. The person driving the horse was the owner's son and could not talk at the moment. The good neighbor added: "The horse is cut pretty bad, can you please come."

When I arrived at the farm I found what had recently been a vital, and proud young racehorse, not long off the track. Now, however this poor fellow had several abrasions and cuts on the front of both front ankles and both front knees. He was very sore and lame. I quickly accessed the horse, surveyed the damage and developed a treatment plan. I then asked to talk to the owner. The good neighbor, pointing to a buggy, replied: "the owner is still unavailable but his son is over there."

I noted the scene as I walked over to a young man leaning on a buggy. Behind the boy, two nervous looking teenage girls stood fidgeting. Further in the background was another buggy filled with several teenagers. When I got closer I noticed two large speakers in the back of the buggy hooked to a stereo and powered by car batteries. There were a few empty beer cans on the floor boards.

As I explained my diagnosis and treatment plan the boy was unable to focus. It suddenly hit me; this kid was drunk! With this realization I put the entire picture together. Without permission, when Dad was out of town, the boy and his girlfriend had taken the new racehorse out for a spin. While racing with their friends the new horse, who was used to a track not the road, had slipped and fell injuring both front limbs.

I finished explaining what I intended to do to treat the horse. The boy looked at me and pleaded; "Mr. you just got to fix him, my Dad is going to kill me." At that moment I recognized the look in his eyes. It was the same look in my eyes when I was 16 years old and had wrecked my Dad's new car.
As I said; people are people, no matter what religion.